Three world wars, control of America’s oil and banking and the start of a Middle Eastern agenda

1868: Jacob (James) Mayer Rothschild dies, shortly after purchasing Château Lafite, one of the four great premier grand cru estates of France. He is the last of Mayer Amschel Rothschild’s sons to die.

1871: An American General named Albert Pike, who had been enticed into the Illuminati by Guissepe Mazzini, completes his military blueprint for three world wars and various revolutions throughout the world, culminating into moving this great conspiracy into its final stage. 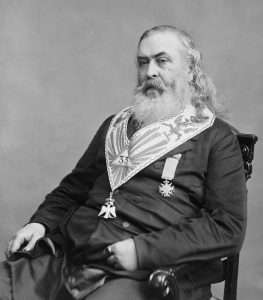 The 1st world war is to be fought for the purpose of destroying the Tsar in Russia as promised by Nathan Mayer Rothschild in 1815. The Tsar is to be replaced with communism, which is to be used to attack religions, predominantly Christianity. The differences between the British and German empires are to be used to foment this war.

The 2nd world war is to be used to foment the controversy between fascism and political zionism with the slaughter of Jews in Germany a lynchpin in bringing hatred against the German people. This is designed to destroy fascism (which the Rothschilds created) and increase the power of political zionism. This war is also designed to increase the power of communism to the level that it equaled that of united Christendom.

The third world war is to be played out by stirring up hatred of the Muslim world for the purposes of playing the Islamic world and the political zionists off against one another. Whilst this is going on, the remaining nations would be forced to fight themselves into a state of mental, physical, spiritual and economic exhaustion.

On August 15th 1871, Albert Pike writes a letter (now catalogued in the British Museum) to Guiseppe Mazzini in which he states the following:

“We shall unleash the nihilists and the atheists and we shall provoke a great social cataclysm which in all its horror will show clearly to all nations the effect of absolute atheism; the origins of savagery and of most bloody turmoil.

Then everywhere, the people will be forced to defend themselves against the world minority of the world revolutionaries and will exterminate those destroyers of civilization and the multitudes disillusioned with Christianity whose spirits will be from that moment without direction and leadership and anxious for an ideal, but without knowledge where to send its adoration, will receive the true light through the universal manifestation of the pure doctrine of Lucifer brought finally out into public view. A manifestation which will result from a general reactionary movement which will follow the destruction of Christianity and Atheism; both conquered and exterminated at the same time.”

Pike, who having been elected as Sovereign Grand Commander of the Scottish Rite of Freemasonry’s Southern Jurisdiction in 1859, was the most powerful Freemason in America. He would retain that post for 32 years until his death in 1891.

He also published a book on the subject in 1872 entitled, “Morals and Dogma of the Ancient and Accepted Scottish Rite of Freemasonry,” in which he candidly states the following:

“LUCIFER, the Light-bearer! Strange and mysterious name to give to the Spirit of Darknesss! Lucifer, the Son of the Morning! Is it he who bears the Light, and with its splendors intolerable blinds feeble, sensual or selfish Souls? Doubt it not!”

1873: The loss making Rio Tinto copper mines in Spain are purchased by a group of foreign financiers including the Rothschilds. These mines represented Europe’s largest source of copper. 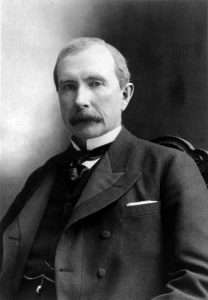 He then identifies the other largest bankers in America at that time. They are J.P. Morgan, who controls Wall Street, and the Drexels and the Biddles of Philadelphia. All the other financiers, big and little, danced to the music of those three houses. Schiff then gets the European Rothschilds to set up European branches of these three large banks on the understanding that Schiff, and therefore Rothschild, is to be the boss of banking in New York and therefore America.

N M Rothschild & Sons undertake a share issue to raise capital for the first channel tunnel project to link France to England, with half of its capital coming from the Rothschild owned Compagnie du Chemin de Fer du Nord.

This year Lionel De Rothschild also loans Prime Minister Benjamin Disraeli the finance for the British government to purchase the shares in the Suez Canal, from Khedive Said of Egypt. This was done, as the Rothschilds needed this access route to be held by a government they controlled, so they could use that government’s military to protect their huge business interests in the Middle East.

“The division of the United States into two federations of equal force was decided long before the civil war by the high financial power of Europe. These bankers were afraid that the United States, if they remained in one block and as one nation, would attain economical and financial independence, which would upset their financial domination over the world.

The voice of the Rothschilds predominated. They foresaw the tremendous booty if they could substitute two feeble democracies, indebted to the financiers, to the vigorous Republic, confident and self-providing.

Therefore they started their emissaries in order to exploit the question of slavery and thus dig an abyss between the two parts of the Republic.”

1880: Rothschild agents begin fomenting a series of pogroms predominantly in Russia, but also in Poland, Bulgaria and Romania. These pogroms resulted in the slaughter of thousands of innocent Jews, causing approximately 2 million to flee, mainly to New York, but also to Chicago, Philadelphia, Boston and Los Angeles.

The reason these pogroms were initiated, was to create a large Jewish base in America, who when they arrived, would be educated to register as Democrat voters. Some twenty years later, this would result in in a massive Democratic power base in the United States and be used to elect Rothschild front men such as Woodrow Wilson, to the Presidency, to carry out the bidding of the Rothschilds.

1881: President James A. Garfield (The 20th President of the United States who lasted only 100 Days) states two weeks before he is assassinated:

“Whoever controls the volume of money in our country is absolute master of all industry and commerce… and when you realize that the entire system is very easily controlled, one way or another, by a few powerful men at the top, you will not have to be told how periods of inflation and depression originate.”

1883: After 6,000 feet of tunnel in the channel tunnel project being excavated, the British government halts the project citing the fact that it would be a threat to Britain’s security. 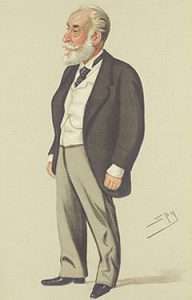 The Rothschilds finance the amalgamation of the Kimberley diamond mines in South Africa. They subsequently become the biggest shareholders of this company, De Beers, and mine precious stones in Africa and India.

1891: The British Labour Leader makes the following statement on the subject of the Rothschilds:

“This blood-sucking crew has been the cause of untold mischief and misery in Europe during the present century, and has piled up its prodigious wealth chiefly through fomenting wars between States which ought never to have quarreled.

Whenever there is trouble in Europe, wherever rumours of war circulate and men’s minds are distraught with fear of change and calamity you may be sure that a hook-nosed Rothschild is at his games somewhere near the region of the disturbance.”

Comments like this worry the Rothschilds and towards the end of the 1800’s they purchase Reuters news agency so they can have some control of the media.

1895: Edmond James de Rothschild the youngest son of Jacob (James) Mayer Rothschild visits Palestine and subsequently supplies the funds to found the first Jewish colonies there, this is to further their long term objective of creating a Rothschild owned country.

1901: The Rothschild banking house in Frankfurt, Germany, M. A. von Rothschild und Söhne closes as there is no male Rothschild heir to take it on.

1906: The Rothschilds claim that due to growing instability in the region and increasing competition from Rockefeller (the Rockefeller family are Rothschild descendants through a female bloodline) owned Standard Oil, this is why they sell their Caspian and Black Sea Petroleum Company to Royal Dutch and Shell. This is another example of the Rothschilds trying to hide their true wealth.

1907: Rothschild, Jacob Schiff, the head of Kuhn, Loeb and Co. in a speech to the New York Chamber of Commerce warns that:

“Unless we have a Central Bank with adequate control of credit resources, this country is going to undergo the most severe and far reaching money panic in its history.”

Suddenly America finds itself in the middle of another typical run of the mill Rothschild engineered financial crisis, which as usual ruins the lives of millions of innocent people throughout America and makes billions for the Rothschilds.

1909: Jacob Schiff founds the National Advancement for the Association of the Coloured People (NAACP). This was done to incite black people into rioting, looting and other forms of disorder, in order to cause a rift between the black and white communities.

“Age of the Rothschild,” and concluded that there was, “Only one power in Europe, and that is Rothschild.”

“Mr Schiff is head of the great private banking house of Kuhn, Loeb, and co, which represents the Rothschilds interests on this side of the Atlantic.

He has been described as financial strategist and has been for years the financial minister of the great impersonal power known as Standard Oil.

He was hand in glove with the Harrimans, the Goulds, and the Rockefellers in all their railroad enterprises and has become the dominant power in the railroad and financial power of America.”

By Andrew Hitchcock Next: part 2 Mayer Amschel Rothschild and his five sons – the start of an empire 1743: [read more]