The primary needs of any nation is to provide food, water, sanitation, clothing and a dwelling. Whilst there are many examples across the third world of under developed nations which require urgent attention it may surprise many that the United States of America should come under scrutiny with regards to its own food security.

As illustrated below, the number of people in receipt of food stamps, via the  Supplemental Nutrition Assistance Program (SNAP), continues to fall. As of March 2016, there were 44.3 million, the lowest level since February 2011. This reflects a 2.8% drop in the number of recipients from the 45.6 million people receiving SNAP benefits in March 2015. At first glance one could believe this is due to an improvement in the US economy but as ever first glances can be deceptive.  It is clear that changes to the eligibility criteria to receive SNAP benefits, which started in 2014, even when still unemployed, is responsible for the reduction in these figures. 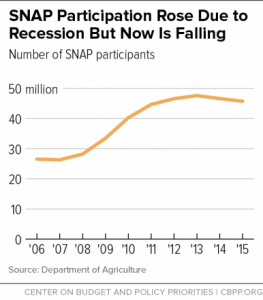 Many states relaxed the criteria for receiving food stamps in 2009 and the number of participants sharply increased. As official unemployment rates began to decrease states began to tighten up their eligibility criteria correspondingly. The issue of unemployment is a can of worms in itself as it is clear the real rate is in the 20% range and not below 5% as the official figures suggest.

To qualify for SNAP a household must meet three main criteria, although individual states can make adjustments to these criteria,

It should be noted that some people are not eligible for SNAP no matter how small their income or assets may be, such as strikers, most college students, and certain legal immigrants, with undocumented immigrants also ineligible. Whilst the issue of eligibility is certainly the cause for the fall in SNAP participation rather than economic improvement, we also need to factor into our thinking the issue of what is described as “food hungry” people.

The U.S. Department of Agriculture (USDA) defines food security as “access by all people at all times to enough food for an active, healthy life.” In 2006, the year before the housing market crash began, the USDA estimated that less than 10.9% of American households were food insecure. By 2009, that figure had increased to 14.7%. In 2014, the most recent year on record, 14% of all American households are not food secure which equates to 17.4 million homes across the United States,  equating to over 48 million people. By the time the USDA reports its 2016 figures in September 2017, controversial further SNAP eligibility restrictions are likely to see those figures increase. Listed below are statistics, which should not only shock but also sadden, given the US is regarded as being a first world nation.

When we factor in the labour force participation rate, as illustrated below, we can see hunger remains an acute problem because millions of Americans are still struggling financially since the 2008 crash.

Wage growth has been completely asymmetric to the real economy in keeping with many Western nations. An analysis from the Economic Policy Institute found that “between 2000 and 2015”, wages for the bottom 60 percent of male workers were “flat or declined” and that wage gains, unsurprisingly, have been largely concentrated amongst the highest earners.

What is clear, no matter how many changes are made to eligibility criteria, the US is in the midst of another economic crisis, which will eclipse that seen in 2008. The fact there are tens of millions of Americans either food hungry or in receipt of food stamps, coupled with a declining labour force participation rate, is a clear illustration of a nation in terminal decline.

Next: Part Two We will highlight some key initiatives and developments that demonstrate why the Financial Reset is now very [read more]

To call the F-35 fighter project a debacle would almost be a term of endearment. Recent estimates have suggested that [read more]

Deutsche Bank had the highest capital shortfall, 19 billion euros ($21 billion), in a study of 51 European banks according [read more]

Superb in their day.

SunOS was excellent too.

The irony is that the US is continuing to push nations away from its sphere of what it terms democracy into the arms of what it terms authoritarian regimes like China and Russia and very few in the west are asking themselves why.

Claims dollar index was rising due to rising US interest rates.

DXY was a fake rally as we have said all the way along.

Not that recent weeks is something to get carried away with, but there are tentative indications that people are finally realising that current interest rates are an irrelevant consideration when it comes to now owning gold and by extension silver.

Incredible song from an incredible album released in 1992, Saw Tori in a venue with about 50 people promoting the Little Earthquakes album back then, the energy and intensity was offscale.

Oh and the fed increased interest rates by 25bp.