The following graph depicts why we appear once again to be at a Minsky moment in the credit or business cycle. The Minsky moment is named after the Russian economist Hyman Minsky. Periods of prosperity and a perceived increase in the value of investments all to often leads to increased speculation using borrowed capital and all to often beyond the means of the people doing so. The upturn in the markets is then followed by spiralling debt and consumers who have borrowed too much are compelled to liquidate their viable assets to settle their loans or if they have no assets available to meet their debt obligations they will default.

Of course this scenario has been exacerbated by QE, ZIRP and latterly by central bank intervention in the form of sovereign and corporate bond buying on a monumental level. If that was not bad enough we are now seeing the buying of equities thrown into this equation. This is yet another indication as to why the economy policies of central banks is utterly flawed in every conceivable way. 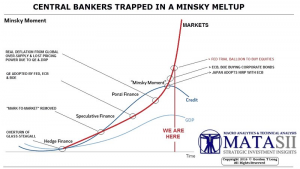 Why the US Student Debt Bubble Is Also Creating Economic Headwinds

There is absolutely no doubt that US student debt levels are now out of control, fuelled by economic policies in [read more]

It is well worth checking out Yellen’s comments at the recent symposium, sponsored by the Federal Reserve Bank of Kansas [read more]

West seems worried about the tanks they are sending falling into the hands of Russia.

Hardly a ringing endorsement for being a game changer

Admission in the west that Ukraine lacks the necessary runways to deploy f15s there. The airstrips that would have been available have been badly damaged by Russian missiles strikes.

Moscow and Ankara have launched discussions related to the security of their planned gas hub.

No doubt given the blowing up of Nordstream 1 and 2 will figure prominently in those discussions.

All journeys start with the first step. Sometimes the second step is the hardest:

Russia's deputy foreign minister Sergei Ryabkov will hold a meeting with Lynne Tracy, the new US ambassador to Moscow, early next week.